Noah's Ark: Improving quality and standards for our children 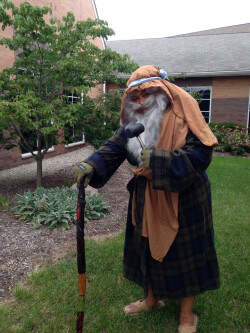 Over the past seven years, Noah’s Ark Preschool and Childcare has been raising the bar to provide better education and care for its students. Noah’s Ark opened its doors in April of 1992, and Sherry Pipkin (in photo disguised as Noah) has been the director since 1998. Sherry and the assistant director, Shannon, have always been looking for ways to improve the school. In 2010, Noah’s Ark received a grant from United Way of Central Indiana to participate in Paths to QUALITY: Indiana’s Child Care Quality Rating and Improvement System. Paths to QUALITY is a program for preschools and childcare centers with the incentive of increasing the quality in childcare centers, childcare ministries, and childcare homes, as well as increasing the support of Indiana’s young children’s learning, development, and well-being. https://www.in.gov/fssa/pathstoquality/3715.htm

United Way of Central Indiana (UWCI) began offering grants to help unlicensed registered childcare ministries to provide better quality of care for children by advancing through the 5 levels of standards within Paths to QUALITY. Back in 2010, Noah’s Ark was the first registered ministry to receive the United Way grant, which amounted to $50,000. This money went toward structural improvements, such as changing the lights, repainting, adding an exit door, and installing a fence around the playground. Once these improvements were made, Noah’s Ark achieved Level 1 status in the Paths to QUALITY program.

Since 2010, Noah’s Ark has received more grants from UWCI for books, new toys, furniture, and food/nutrition improvements. The most recent grant the preschool received was for $5,000. It went toward professional development and training for teachers. 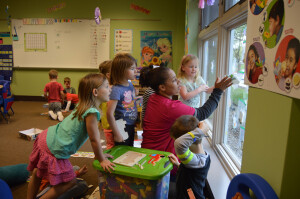 In the next few weeks/months, an inspector will come review the changes, and Noah’s Ark is hoping to move from Level 1 to Level 3 in the program. Director Sherry Pipkin says that being part of the Paths to QUALITY program has tremendously improved the preschool in many aspects, but the biggest impact will be on the teachers. Through the requirements of the program, Noah’s Ark teachers will stay up-to-date on curriculum, receive regular training and be, overall, better equipped to provide the best care for the children. Sherry believes that this is the most important part of the preschool: that children receive the best care and feel loved throughout their time at Noah’s Ark. The preschool currently serves 120 children ranging from 6 weeks to 6 years and has a teaching staff of 26. Noah’s Ark Preschool and childcare is truly determined to provide the best care for the children it serves, and we are excited to watch the advances it is making!

Opposite Day is an unofficial holiday that can be defined as a day when every action is modified so that its meaning is negated. In other words, someone says the opposite of what they mean. It can also mean just doing things backwards – or opposite. Have breakfast for dinner, for example. I like eggs and bacon and cinnamon toasts often for dinner – and not just on opposite day! I think that opposite day can also mean doing the exact opposite of what the world expects.

Going opposite of what the world expects is the norm with Jesus. With Jesus, it’s opposite day every day. Why is that? The world wants one thing and Jesus wants the opposite. The world often values success, comfort, entertainment and sports, and getting ahead. Jesus values getting behind, humility, putting others first, and not having worldly success. So it’s opposite day. Jesus has mysterious yet opposite sayings like these:

“…whoever wants to become great among you must be your servant, and whoever wants to be first must be slave of all. For even the Son of Man did not come to be served, but to serve, and to give his life as a ransom for many.” Mark 10:43-45

In the last saying in Mark’s gospel, Jesus is responding to James and John – two of his best friends and two of his disciples. They ask for the best places to sit in paradise with Jesus, on his right and his left. Basically they want to be exalted. Maybe they just want to be close to Jesus, which is a good thing. But they also want special treatment by Jesus over their fellow disciples – not a good thing. They want the best spots to sit. Jesus doesn’t say yes to them but tells them instead in order to be great they must be servants, and whoever wants to be first must be a slave - or last. Opposite day.

To save your life you must lose it. Jesus is saying if you want to keep things nice and cozy for yourself so be it. But to follow Jesus means to carry your own cross – each person has to give up or sacrifice something in order to truly follow Jesus. Opposite day.

Jesus criticizes the religious leaders. Jesus touches lepers and heals the hurting and wants a rich young man to sell his possessions to give to the poor. Opposite day.

Instead of coming as a king or military leader, Jesus comes as a humble baby born to poor teenagers. Instead of obeying all of the laws of the Pharisees, Jesus comes to fulfill the law. He fulfills the law and highlights loving God and loving neighbor over legalistic minutiae. Instead of overthrowing the Roman government, he allows himself to die – even die on a cross. Opposite day.

So as we end our Lenten season and draw near to Good Friday and Resurrection day, what will do with Jesus? We can be opposite like him. Sometimes I think we make our faith too complicated. The Bible can be hard to understand in places and faithful Christians differ on some of the non-essentials of our faith. Yet, we can agree we need to follow Jesus – and be opposite like him. So in that way, we can make it simple. As we remember and celebrate Jesus, we can be thankful for his grace for us. And in our thanks, we can live for him. We can put others before self; care for the poor and hurting; be humble instead of prideful; and pray to Jesus to ask him what crosses we should be carrying to be like him. We can be last instead of first, and serve instead of being served. I know I am far from perfect in my desire and my actions to be like Jesus. But the inspiration of Easter and the act of learning more about Jesus in the gospels can move me forward in my effort of being like Jesus. At Easter and all year, I want be opposite with Jesus. With Jesus, it’s opposite day every day.

Posted by Scott Shelton with