Robert Baden-Powell founded Boy Scouts in London in 1908. American D. Boyce brought Boy Scouts to the United States on February 8, 1910. Since that time, Scouting has grown in the United States from around 2,000 Boy Scouts and leaders to millions of participants today. ZPC is delighted to have many Scout families in its congregation and to benefit from several Eagle Scout Projects. On Sunday, February 12, we celebrated Boy Scout Sunday at ZPC and recognized and honored Scouts and their commitment to God. 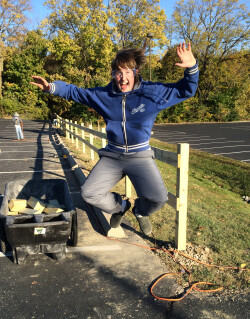 One of the 12 Scout Laws is “A Scout is Reverent.” Carson Castle, 11, explains what it means to be reverent. “Reverent, to me, means to be full of worship and to have full respect for everyone including your enemies.” Carson’s brother, Bryce, is an Eagle Scout. ZPC benefitted from Bryce’s Eagle Scout Project, which was building a 266-foot split rail fence that divides the upper and lower ZPC parking lots. Bryce’s project was a continuation of another Eagle Scout Project that 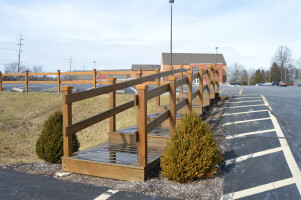 Michael Argentine, who is now a student at Purdue, completed a few years earlier. Michael‘s project built steps that connect the parking lots, providing a safe place for people to walk from one parking lot the other.

To Eagle Scout Ryan Carr, 18, being reverent means “you have a solid
relationship with God, but you respect the beliefs of others around you as well.” Ryan’s Eagle Scout Project built a fence around the ZPC

dumpster on the east side of the church to remove it from view. The fence replaced the existing trees that served as a screen. These trees died every few years and needed to be replaced frequently. Ryan’s brother Jason, 15, is also involved with Scouting. He indicates that to him being reverent means “to do what God has planned for you.”

Another part of the Scout Law reinforces Scouts’ duty to God. For 12-year-old Brady Forler this means, “that through tough things, even political crisis, you should always do your best to be connected with God.” Thomas Wallbank, also 12, states “This phrase means to me that you will help everyone at all times and be a good citizen. I will not despise someone because of what they look like.”

These Scout values that we highlighted on Sunday strengthen character in family, community, and faith. Zachary Schwarz, 14, lives this out in his daily life. Zachary says, “I try to be respectful of others and be a good neighbor. God teaches us to love one another.”

Scouting brothers, Ian Ray, 15, and Bryan Ray, 12, agree with Zachary stating “reverence and a duty to God and others should be a part of all that we do.”

In addition to these important values, Scouting also helps educate boys on saving lives, serving others, developing character, encouraging conservation, and growing STEM (science, technology, engineering, and math) leaders. Thomas Burgess, 17, was able to utilize these values when he completed a 12 X 16 foot storage shed for his Eagle Scout Project. The shed was for the Boys and Girls Club West and sits near the Zionsville Youth Soccer Association fields. 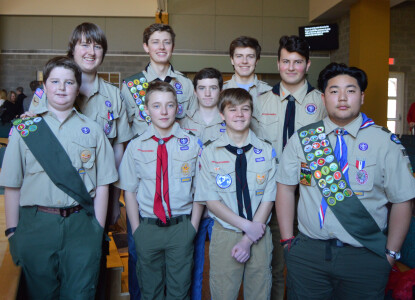 ZPC was proud to honor this group of young Scouts for their commitment to God and to our community.

If you’d life more information on Scouting, connect with Cherie Castle or Cynthia Carr or go to crossroadsbsa.org.

“Bear one another’s burdens, and so fulfill the law of Christ.” - Galatians 6:2

At a time of year when many of us find ourselves overeating—and even complaining about—the ridiculous amounts of food we have at our disposal (“Ugh. More Christmas cookies? Seriously?”), it’s hard to imagine there are people going hungry not far away. Yet that is exactly the case for many on the near Eastside of Indianapolis. Over Christmas break, while my West Carmel children are at home eating meal after snack after meal, other children—who typically rely on their school cafeteria for breakfast, lunch, and snacks—will go hungry. Fortunately, for kids in the 46201 and 46203 zip codes, there is Shepherd Community Center, a non-profit Christ-centered organization on East Washington Street, whose purpose is to meet this and many other needs of its surrounding community.

I first became familiar with Shepherd Community Center about 14 years ago, when our family of three filled our first “Shepherd Tote” at Christmas. Not too long after, my husband and I, along with a handful of other ZPCers, served breakfast at Shepherd to attendees of its free Saturday morning health clinic. My husband and I were immediately impressed with the way Shepherd was so dedicated to serving the surrounding neighborhood that they took the time to turn the academy into a health clinic four Saturdays per month—then turn it back into a school by Monday morning. Since that time, we’ve continued to be impressed with the way Shepherd does what needs to be done to meet the physical, emotional, spiritual, and academic needs of its community. When the need to get healthier foods into the hands of the community (who rely a lot on gas stations for their “groceries” as there is only one full-service grocery within walking distance of their homes) became apparent, Shepherd started a vegetable garden and chicken co-op whose beneficiaries take care of tending them. When it became apparent that a Saturday health clinic left some without access to care throughout the week, Shepherd partnered with Eskenazi Health, who now provides its Mobile Health Clinic every Tuesday and Wednesday. While many organizations are good at identifying the needs of the people they serve, Shepherd is also excellent at doing what it takes to help solve those needs—and all with a Christ-centered approach. 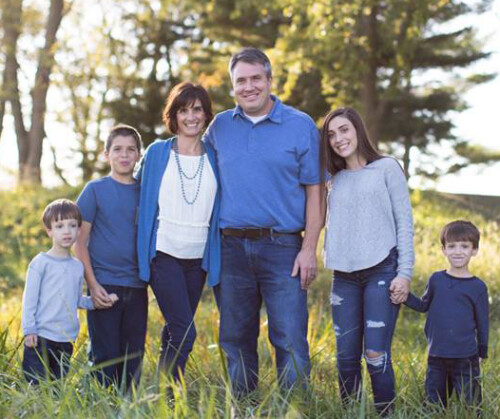 As our family of three grew over time to a family of six, we found ourselves with much less time to spend at Shepherd. We continued to contribute financially, but wanted to be able to form relationships with the Shepherd kids, and I longed for the day when at least one of us would be able to do so. Just last week, having retired in August and with all of my own kids now in school, I was able to spend my first of hopefully many Wednesdays volunteering at Shepherd. I cannot express to you how much joy I received from working with those kids for just four short hours, but I’ll say this: the first fourth-grade girl I met told me my hair was “soooo” pretty (my own kids would never tell me that), one of the boys begged me to eat lunch with them instead of the adults (I did, of course), and many of them were upset that I wouldn’t be back this week due to Thanksgiving—be still my heart!

So, what does any of this have to do with your busting holiday waistline and the hungry kids at Shepherd? Well, during school breaks, Shepherd passes out boxes of food—donated by ministry partners such as ZPC—to children in its academy, after-school program, church congregation, and various other outreach programs so that children won’t have to go hungry while not in school. This year, Shepherd hopes to provide nearly 1,000 totes—and ZPC is one of three churches who has stepped up to help provide them. 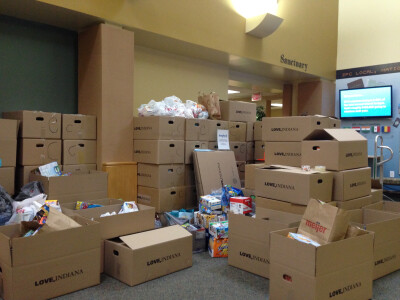 Between and after Sunday services on November 27 and December 4, ZPCers (or anyone else who wants to) can purchase a box in the Gathering Space for $5 and fill it with specific items for a Shepherd child. Filled boxes can be returned to the Gathering Space until December 11. Then, on December 13, Shepherd employees and volunteers will pick up our filled boxes to be distributed before Christmas break. This year, ZPC has committed to filling 250 totes—each of which can be filled for around $100. So, grab a tote and fill it (by yourself, with your family, with your small group, or with friends), and this holiday season—when you feel you can’t possibly partake of another morsel of food—remember you helped fill the tummy of a little one who might otherwise have gone without.

*Don’t have the time or money to fill a tote? You can still help out! Volunteers are needed to sort totes on December 4 and 11 and to load filled totes onto the Shepherd truck on December 13.

Posted by Jenni Nolan with